Retirement Income Security for Everyone

All Americans desire a financially secure retirement. But few Americans achieve it. As a result, millions of American retirees are forced to rely primarily on Social Security.

Indeed, half of retiree households get more than half their income from that government program, and one in four gets 90% or more of their income from it.1 Yet the median monthly Social Security retirement benefit is just $1,514.2 This low amount is not due to a flaw in the Social Security system; the program was designed to merely supplement a worker’s retirement income – not serve as the primary, let alone sole, source of income in retirement.

There are five major reasons why millions of retirees are so dependent on Social Security. First, millions of American families don’t earn enough money to save, and thus aren’t able to accumulate the wealth needed to support themselves in retirement. Although median U.S. household income is up 14% since 1990, health-care costs since then are up 51%, housing prices are up 290%, college costs are up 311%3 and food prices are up 107%.4 Because the costs of living have risen so much faster than incomes, four in 10 Americans don’t have the cash to pay an unexpected expense of $400.5

As a result, millions of Americans don’t save for retirement even when employers offer them free money as an inducement to do so: more than half (56%) of those earning less than $50,000 don’t participate in their workplace retirement plan,6 and 26% of all U.S. households have no retirement savings whatsoever.7

Second, nearly a third (32%) of private sector employees work for employers that don’t offer a retirement plan.8 This effectively prevents people from saving for retirement, because people with access to workplace retirement plans are 12 times more likely to save for retirement than those who don’t have access.9

But even those who have managed to save for retirement haven’t saved very much: the average 401(k) balance for Americans nearing retirement is so low ($357,000)10 it can generate only about $1,000 per month, based on withdrawal rates commonly recommended by financial planners – even though the average preretirement income for such households is $5,625,11 or 5.6 times more.

Third, we don’t let Americans save for retirement throughout their entire lives. Although life expectancy in the United States for those age 65 is now 86.6 years,12 Americans can’t participate in pension plans or contribute to 401(k) plans or Social Security unless and until they get a paycheck – literally wasting two decades of savings opportunity.

And even though most people begin full-time employment in their 20s – ostensibly giving them the opportunity to start saving for retirement at that age – the majority don’t actually begin participating in workplace retirement plans until age 37.13 Thus, millions of Americans fail to accumulate retirement savings during nearly half their lives. The result is a massive lost opportunity to 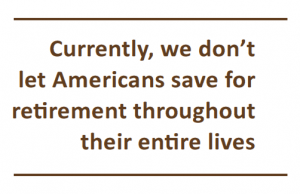 Although compounding’s value is commonly known, access to it is denied – solely because Americans cannot participate in retirement plans beginning at birth.

Fourth, children born into low-income households are likely to remain low-income their entire lives – making them highly likely to rely excessively on Social Security in retirement. Although median household incomes have risen 49% since 1970, according to the Pew Research Center14, gains have not been uniformly enjoyed: Incomes for the top 5% of households rose 115% while incomes fell 15% for the bottom 20% of households.

This disparity in U.S. household income is well known. Less well known is the fact that income inequity is persistent, both throughout life and across generations. As a result, those born into low-income households are likely to stay low-income. (The reasons for this persistency are beyond the scope of this paper but amply documented by numerous academic studies.) 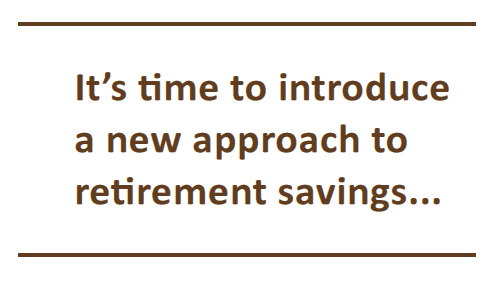 Pew’s data show that the broadening of the wealth gap is causing the middle class to disappear: In 1971, 62% of U.S. households were in the middle class. By 2019, only 43% were in middle-class households. This has caused the ranks of the upper income households to swell, from 29% in 1971 to 48% in 2019. But this upward mobility wasn’t the experience of those in lower-income households: Throughout the past 50 years, the lower-income tier has remained steady. Indeed, 10% of U.S. households were low-income in 1970 and 9% still were in 2018. 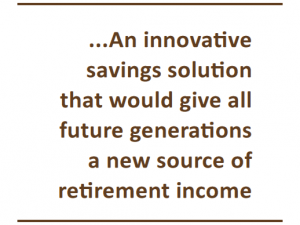 Fifth, half of all U.S. workers have taken actions detrimental to their future retirement security, according to a 2020 study by Edelman Financial Engines.15 One in three workers have accessed money from their retirement accounts early and 60% say they will do it again. Another 16% are considering taking their first loan or hardship withdrawal.

It’s time, therefore, to introduce a new approach to retirement savings, one that doesn’t penalize hard-working Americans who are struggling with the costs of living, doesn’t make one’s ability to save for retirement dependent on where (or whether) they get a paycheck, doesn’t force them to miss millions of dollars in wealth accumulation by forgoing decades of compounding, doesn’t perpetuate their poverty merely because of their household income at birth, and prevents workers from acting against their own best interests by letting them access retirement savings prior to retirement.

What’s needed is a savings solution that would provide all future generations of Americans a new source of retirement income, starting when they attain age 70, sufficient to place them at the median of U.S. personal income ($38,761 in 2020, according to the Census Bureau16) – essentially lifting all Americans into the middle class in retirement. Those born into the lowest Household Income Group would receive more than $35,000 per year (in 2020 dollars), while those born into the wealthiest of families would receive more than $1,000 annually. Everyone would benefit from the program. No more American retirees living in poverty. No more low-income retiree households.

And the program would be completely self-funding. No cost to the government or taxpayers.

The program is called Retirement Income Security for Everyone (RISE), and here’s how it works. Starting next year, and every year thereafter, the U.S. Treasury Department would issue approximately $23.4 billion in RISE Savings Bonds, or $5,884 for each of the approximately 4 million children born each year.17 This figure represents 0.1% of the value of the federal government’s marketable securities.18

The money would be managed by an entity established by Congress. This entity could take any of several forms, such as:

The RISE Bonds would be eligible for redemption in 20 years, like other Savings Bonds. Because redemptions (as well as the program’s administrative and operational expenses) would be funded by the program itself, there would be no cost to the government or taxpayers.

Based on U.S. Census data, each baby would be assigned at birth to one of six Personal Income Bands, shown in Appendix A, based on their family’s average Household Income over the preceding five years. Upon age 70, they would each begin receiving monthly income (inflation-adjusted) based on their PIB. The program is designed to provide this income to age 100, well beyond the current life expectancy of Americans. If a baby dies prior to age 100, income they’d have received in retirement would fund those who live beyond age 100.

These figures are based on:

Currently, Americans predominantly save for retirement via the workplace. More than half of all U.S. workers (56%) participate in an employer-sponsored pension or retirement plan22 and 179 million workers pay into the Social Security system.23

To save for retirement, American workers typically forgo 23.53% of their income every year – 13.5% in 401(k) contributions (including employer matching contributions)24 plus 10.03% in Social Security retirement taxes.25

And what do workers get in exchange for their career-lifetime of savings? Let’s look at the typical worker who:

By contrast, RISE would provide more than $120,000 (median) to workers at age 70 – or 15% more. Total median lifetime retirement income from RISE would exceed $11.4 million, or 2.5x more than that provided by typical 401(k) plans plus Social Security. And instead of investing more than half a million dollars to produce this income, RISE makes it happen with a single $5,884 Savings Bond.

RISE is an innovative, permanent and completely self-funding way to ensure that all future generations of Americans can enjoy a financially secure retirement.

About the Author of RISE

Ric Edelman is one of the most influential people in the financial services field, according to Investment Advisor, RIABiz and InvestmentNews. He was ranked 3 times as the nation’s #1 Independent Financial Advisor by Barron’s, is in the Research and Barron’s Advisor Halls of Fame, and received IARFC’s Lifetime Achievement Award. Ric created the first exponential technologies ETF and holds two patents.

He is Distinguished Lecturer, William G. Rohrer College of Business, Rowan University and a member of the advisory boards of Stanford University’s Center on Longevity and the Milken Institute Center for the Future of Aging. Ric taught at Georgetown University for 9 years and has lectured at Stanford, GWU, Pepperdine, and Roger Williams University.

Championing financial literacy, Ric is ranked among the “100 Most Important Radio Talk Show Hosts” by TALKERS for his show of nearly 30 years, airing on 86 radio stations and reaching 1 million people weekly. He also hosts TV specials for PBS, and is a #1 New York Times bestselling author of 10 books on personal finance, twice receiving the “book of the year” award from the Institute for Financial Literacy.

Ric and his wife Jean are benefactors of the Edelman Center for Nursing, the NVTRP Edelman Indoor Arena, and Rowan University’s Edelman Planetarium and Edelman Fossil Park. Rowan University’s Ric Edelman College of Communication & Creative Arts is named in his honor.