“Such is the power of truly long-term investing – and such is the brilliance of the founder who truly understood it.”

Benjamin Franklin is widely remembered as one of the most influential founders of our nation. He was a respected inventor, publisher, scientist and diplomat. He helped draft the Declaration of Independence and the U.S. Constitution. He negotiated the 1783 Treaty of Paris that ended the Revolutionary War.

By the time he died on April 17, 1790, Ben Franklin was one of the wealthiest men in the United States. In his will, he bequeathed 1,000 pounds sterling each to the cities of Boston and Philadelphia — worth roughly $119,000 in 2019 dollars — with the instructions that much of the money remain untouched for 100 years and the rest untouched for 200 years. 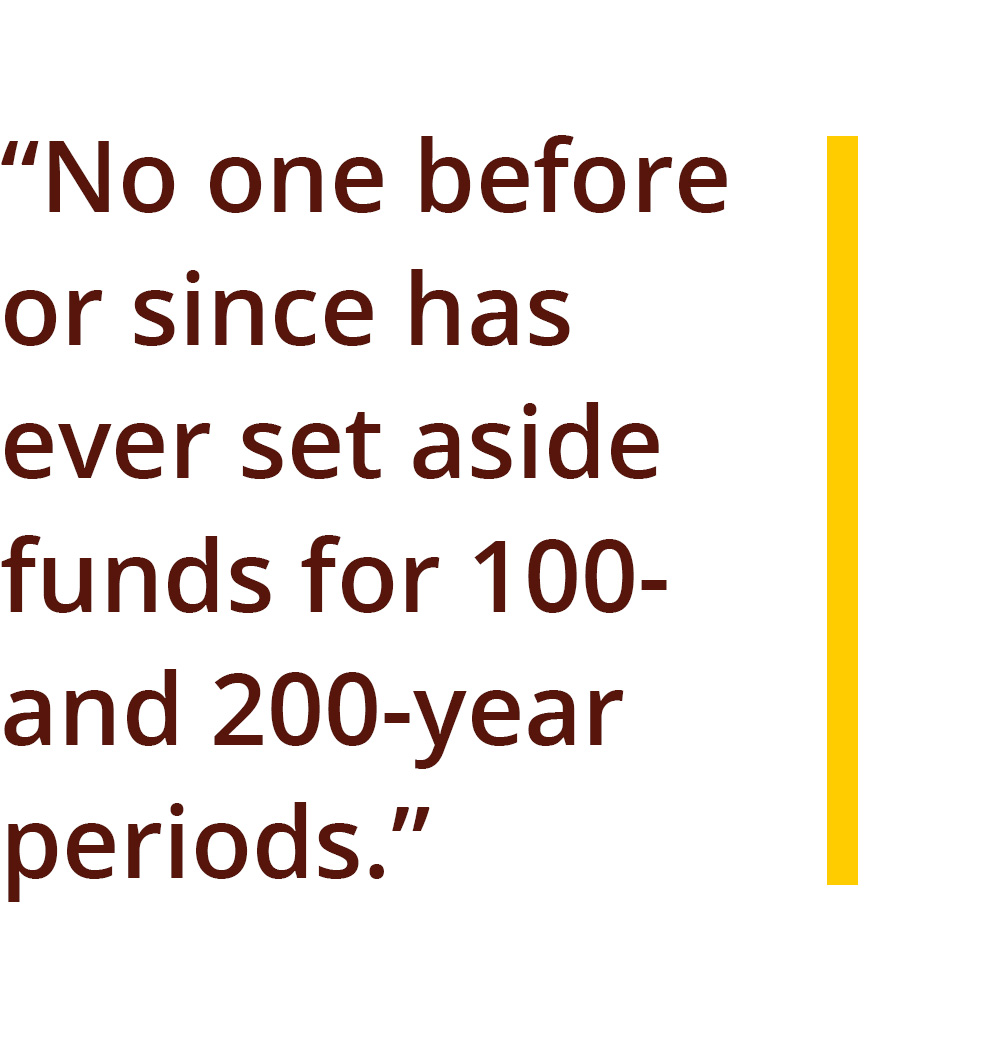 The money was to be lent at 5 percent annual interest to help apprentices under age 25 start businesses. He calculated that “if this plan is executed, and succeeds as projected without interruption for one hundred years, the sum will then be one hundred and thirty-one thousand pounds” — or $15.6 million.

Remembered for being a publisher, scientist, diplomat and inventor, he was also the first truly long-term investor.

In the 100 years following Franklin’s death, hundreds of young entrepreneurs got loans: carpenters, bakers, shoemakers, coopers, tailors, painters, printers, cabinetmakers, blacksmiths, tanners, clockmakers and bookbinders. But officials in both cities also raided the trusts during those 10 decades: Philadelphians used the money to pay public debts, while Bostonians financed construction projects. Still, both trusts kept growing, and by 1890, the Philadelphia trust was worth $100,000 [$3.3 million], while Boston’s trust was worth $431,756 [$12 million].

At that time, Boston used the remainder of the money that was available for distribution at the 100-year mark to create the Benjamin Franklin Institute of Technology. Since its opening in 1908, tens of thousands of students have graduated with degrees in the fields Franklin had encouraged.

In Philadelphia, meanwhile, the bulk of the 100-year distribution allotment went to the Franklin Institute, which had been founded in 1824. Today, the institute continues to be one of the city’s most popular tourist destinations.

No one before or since has ever set aside funds for 100- and 200-year periods. The power of compounding over such long periods allowed a small amount of capital — $119,000 — to become more than $22 million, with another $10 million or more provided in loans to budding entrepreneurs over two centuries. Had city officials not raided the funds prematurely throughout the period, the trusts would have grown to nearly half a billion dollars, exactly as Franklin calculated.

It’s worth noting that Franklin estimated the trusts would grow at a 5 percent annual rate. If the $3.7 million that was produced in the first 100 years then earned 10 percent per year for the second 100 years (matching the U.S. stock market’s average annual return for the past 100 years), the ending value would not have been half a billion dollars. Instead it would have been $51 trillion.

Such is the power of truly long-term investing — and such is the brilliance of the founder who truly understood it.
This is a hypothetical illustration meant to demonstrate the principle of compound interest and is not representative of past or future returns of any specific investment vehicle. They do not include consideration of the investment fees or expenses, time value of money, inflation, fluctuations in principal or taxes.